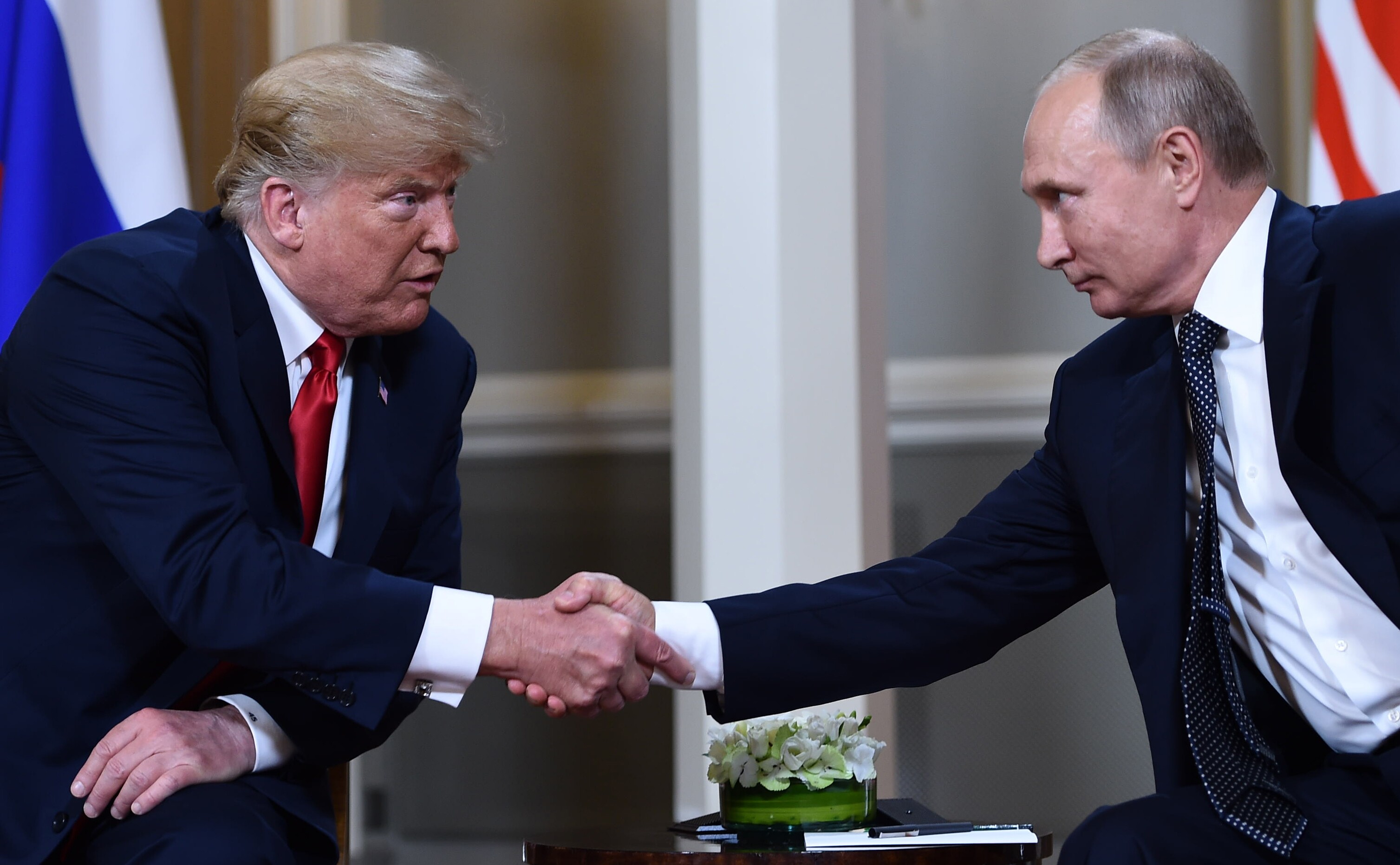 Since the earliest days on the campaign trail, it has never been in doubt who Trump and his team have had in their sights. “Iran is the biggest destabilizing force in the Middle East and its policies are contrary to our interests,” Defence Secretary Mattis told his Senate confirmation hearing, having previously claimed the country posed a bigger security threat than either ISIS or Al Qaeda. Mike Pence called Iran the “leading state sponsor of terrorism” whilst new National Security Advisor John Bolton has for years called for Iran to be bombed. Trump himself, in his own little remix of Pence’s phrase, has called Iran “The Number One State of Sponsored Terror”, which presumably means something derogatory.

China, of course, was famously accused of “raping our country” by Trump in 2016, whilst White House aide Peter Navarro claimed the country was waging “economic aggression” against the US. Former National Security Advisor Steve Bannon announced this week that “we are at war with China”.

Iran and China, then, have been favoured rhetorical targets since day one – but this year that rhetoric has morphed into all-out economic warfare. This month alone, Trump has unleashed tariffs on $60 billion of Chinese goods, threatened to do so on $500billion more, and announced his intention to cut Iranian oil exports to zero by November. These weapons of financial destruction are openly aimed at crippling and sabotaging China and Iran in order to stymie their development and bring them to their knees. Yet at the same time as this is happening, the leader of Iran and China’s major geopolitical ally, Russian President Vladimir Putin, has continued to be courted and flattered by Trump. What is going on?

On the face of it, these hostile acts against two of Russia’s key allies have, as one might expect, been condemned by Putin’s government. Prior to Trump’s May announcement that he would intended to violate the Iranian nuclear deal by restoring sanctions, the Kremlin warned of “harmful consequences” should he do so. And following the recent Helsinki summit between the two leaders, Putin continued to back the deal (albeit on the grounds of limiting Iranian sovereignty rather than defending it) stating that “The Russian position remains unchanged regarding the Iranian nuclear program, and we believe that the JCPOA is an instrument that makes it possible to guarantee the non-proliferation of nuclear weapons in general and in the region in particular,” adding that the deal had turned Iran into one of the most heavily IAEA-monitored countries in the world. Russia similarly denounced the tariffs slapped on China earlier this month.

Yet, behind the rhetorical opposition, Russian actions are facilitating Trump’s aggression. Following 18 months of oil production cuts agreed by Russia and Saudi Arabia in 2016, which had successfully raised oil prices out of the slump into which they had fallen, Russia last month proposed an unexpected and immediate reversal of this policy. The low oil prices which had plagued oil markets before the 2016 cuts were agreed had caused huge problems for producer countries such as Russia, Iran and Venezuela, leading many to believe that the Saudis had been ordered by the US to flood the market in order to sabotage the economies of its geopolitical foes. The new production quotas, then, had given these countries some much-needed breathing space; yet, this June, Russia put forward a proposal to OPEC to increase production by 1.8million barrels per day (bpd) – and, unusually, proposed that these increases were to start kicking in within weeks. In the end, a pact to increase production by 1 million barrels per day – spearheaded by Russia and Saudi Arabia – was agreed by OPEC and non-OPEC countries in late June. The rise was opposed by Iran, Iraq, Venezuela and Algeria, with Iranian oil minister Bijan Zanganeh commenting ahead of the meeting that “OPEC is not the organization to receive instruction from President Trump … OPEC is not part of the Department of Energy of the United States”.

Within days of the adoption of the Russian-led production increase, the Trump administration announced its plans to “reduce Iranian oil exports to zero” by November 4th. Questioned on whether such a policy might cause disruption as countries scrambled to replace supplies, State Department policy director Brian Hooks remarked that “we are confident there is sufficient global spare oil capacity.” Russia’s push for increased production had, in effect, smoothed the path for the next round of Trump’s strangulation of Iran. It was precisely this deal which lay behind Trump’s brazen claim that world oil supplies would plug the gap created by the loss of Iranian crude; without the end to Russian-Saudi production limits, this would have been unthinkable. As things stand, however, all the pieces are in place for Trump to apply serious pressure on all importers of Iranian oil. Whilst the Russian-Saudi deal offers alternative sources of supply, the trade war now underway demonstrates Trump’s willingness to use tariffs against those who do not bend to his geopolitical will. Whilst Trump has openly threatened sanctions against those who do not heed his call to end their dealings with Iran, it is quite possible that those who do heed it will be rewarded with tariff exemptions. China, in particular – Iran’s biggest trading partner, and now threatened with tariffs on all $500bilion of their exports to the US – will be particularly under pressure.

On the surface, then, Russia’s actions appear self-defeating. The end to the, hugely successful, production quotas of the previous 18 months immediately triggered a drop in oil prices – Russia’s main export commodity – whilst facilitating the escalation of US economic warfare against key Russian ally Iran. Yet there are several reasons Russia may be supporting Trump’s moves.

Most obviously, Iran is a major competitor with Russia for oil export markets – especially in Europe. European hopes to reduce dependence on Russian energy supplies are likely to be seriously dashed if they can no longer turn to Iran as an alternative supplier. Quite simply, Russia will sell more oil without Iranian competition.

More than this, however, even Trump’s use of tariffs as leverage to push countries away from Iran could be to Russia’s benefit. If Trump does indeed make tariff-free access to the US market conditional on cutting investment and trade with Iran, China would face a major dilemma.

China has for some years been not only Iran’s major trading partner, but investment financier as well. In 2011, China  signed a  $20 billion  agreement  to  boost  bilateral  cooperation  in Iran’s industrial and mining sectors. Today, China is poised to take over development of the massive South Pars oil and gas field should the French company TOTAL pull out, as they are widely expected to do, whilst a $3billion deal was recently signed giving SINOPEC the right to expand the Abadan oil refinery in Khuzestan Province. Meanwhile, reports Fox News, “With the U.S. Treasury putting pressure on Western banks to not make any deals with Iran, the Chinese state-owned CITIC bank is extending lines of credit worth $10 billion for Iranian banks. This funding will finance water, energy and transport projects. To bypass U.S. sanctions, the lines of credit will use euros and yuan currencies”.

But most significant for Russia is the 2017 $1.5 billion deal made by the Chinese Export-Import Bank to finance a high-speed railway between Tehran and Mashhad. The railway is envisioned to become part of China’s ‘Belt and Road Initiative’ , creating a high-speed transit route between central Asia and Europe that will shave weeks off current travel times.

This May – in a clear act of defiance to the US – China opened a new train line between China’s Inner Mongolia Autonomous Region and Tehran, shortening travel time by 20 days compared to cargo ship. Once the full vision of  a Chinese built high-tech, high-speed rail network across central Asia is realised, however, the current ‘Northern route’ through Russia is likely to be rendered all but redundant.

Could it be, then, that Russia sees it as in its own interests to facilitate Trump’s quest to chase Chinese investment out of Iran in order to preserve its trade routes and access to European oil markets?

If so, it is likely to be disappointed. For Iran is central not only to the Belt and Road Initiative – China’s multi-trillion, multi-decade long ‘geoeconomic’ programme – but also to its defence strategy. As correctly observed in a recent piece published by The Diplomat, “Iran constitutes [China’s] true priority. China has nurtured bilateral relations with Tehran for decades, leveraging a common resentment toward Western dominance. This partnership has great geostrategic importance to both nations. Thanks to its oil and gas reserves, Iran could help Beijing withstand a U.S. attack on its SLOCs (Sea Lines of Communication).”

For China, much as it naturally seeks to avoid further punishment from the US, Iran is simply too important to be bargained away. Unfortunately not so, it seems, for Moscow.