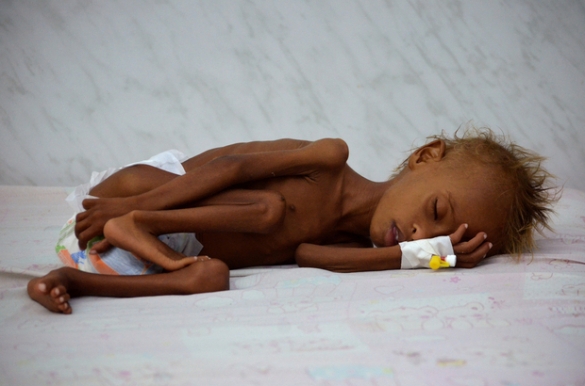 Britain is at the heart of a humanitarian disaster of epic proportions unfolding in the Yemen.

At least 10,000 people have been killed since the Saudi bombing campaign against Yemen began in March 2015, including over 630 children. There has been a massive escalation in human rights violations to a level of around 43 per day and up to ten children per day are being killed, according to Unicef. 73% of child casualties are the direct result of airstrikes, say the UN.

Civilian targets have been hit again and again. Within days of the commencement of airstrikes, a refugee camp was bombed, killing 40 and maiming over 200, and in in October a Medicins San Frontier hospital was hit. Schools, markets, grain warehouses, ports and a ceramics factory have all been hit. Needless to say, all of these are war crimes under international law – as is the entire bombing campaign, lacking, as it does, any UN mandate.

Beyond their immediate victims, the airstrikes and accompanying blockade – a horrendous crime against a population which imports 90% of its basic needs – are creating a tragedy of epic proportions. Back in August 2015, Oxfam had already warned that around 13 million people were struggling to find enough to eat, the highest number of people living in hunger it had ever recorded. “Yemen after five months looks like Syria after five years,” the head of the International Red Cross commented in October. The following month, the UN reported that 14 million now lacked access to healthcare and 80% of the country’s 21-million population are dependent on humanitarian aid. “We estimate that over 19 million people lack access to safe water and sanitation; over 14 million people are food insecure, including 7.6 million who are severely food insecure; and nearly 320,000 children are acutely malnourished,” the UN’s Humanitarian Co-ordinator told reporters in November. He estimated that around 2.5 million have been made refugees by the war. In December, the UN warned that the country was on the brink of famine, with millions at risk of starvation.

Statements from British government ministers are crafted to give the impression of sympathy for the victims of this war, and opprobrium for those responsible. “We should be clear” said Foreign Secretary Philip Hammond in September 2014, “the use of violence to make political gains, and the pointless loss of life it entails, are completely unacceptable. Not only does the recent violence damage Yemen’s political transition process, it could fuel new tensions and strengthen the hand of Al Qaeda in the Arabian Peninsula – threatening the security of all of us…Those who threaten the peace, security or stability of Yemen, or violate human rights, need to pay the price for their actions.” Indeed. So presumably, one might have thought, when the Saudis began their massive escalation of the war six months after Hammond made this statement, the British government must have been outraged?

Not quite. The day after the Saudis began ‘Operation Decisive Storm’, David Cameron phoned the Saudi king personally to emphasise “the UK’s firm political support for the Saudi action in Yemen”.  Over the months that followed, Britain, a long-term arms dealer to the Saudi monarchy, stepped up its delivery of war materiel to achieve the dubious honour of beating US to become its number one weapons supplier. Over hundred new arms export licences have been granted by the British government since the bombing began, and over the first six months of 2015 alone, Britain sold more than £1.75billion worth of weapons to the Saudis – more than triple Cameron’s usual, already obscene, bi-annual average. The vast majority of this equipment seems to be for combat aircraft and air-delivered missiles, including more than 1000 bombs, and British-made jets now make up over half the Saudi air force. As the Independent has noted, “British supplied planes and British made missiles have been part of near-daily raids in Yemen carried out by [the] nine-country, Saudi Arabian led coalition”.
Charities and campaign groups are unanimous in their view that, without a shadow of a doubt, British patronage has greatly facilitated the carnage in the Yemen. “The [British] government is fuelling the conflict that is causing unbearable human suffering. It is time the government stopped supporting this war ” said chief executive of Oxfam GB, Mark Goldring. The director of Amnesty International UK, Kate Allen, said: “The UK has fuelled this appalling conflict through reckless arms sales which break its own laws and the global arms trade treaty it once championed….legal opinion confirms our long-held view that the continued sale of arms from the UK to Saudi Arabia is illegal, immoral and indefensible”. For Edward Santiago, Save the Children’s country director in Yemen, the UK’s “reluctance to publicly condemn the human cost of conflict in Yemen gives the impression that diplomatic relations and arms sales trump the lives of Yemen’s children,” whilst Andrew Smith from Campaign Against the Arms Trade, has written that “UK fighter jets and UK bombs have been central to the humanitarian catastrophe that is being unleashed on the people of Yemen”. Leading lawyers including Philippe Sands have argued that Britain is in clear breach of international law for selling weapons which it knows are being used to commit war crimes.
Now it has emerged that it is not only British weapons being used in this war, but British personnel as well. According to Sky News, six British military advisors are embedded with the Saudi airforce to help with targetting. In addition, there are 94 members of the UK armed forces serving abroad “carrying out duties for unknown forces, believed to be the Saudi led coalition”, according to The Week – although the government refuses to state exactly where they are.
Indeed, even British airstrikes in Syria may have been motivated in part by a desire to prop up the flagging war effort in Yemen. Questioning of Philip Hammond in parliament recently led him to admit that there had been a “decrease in air sorties by Arab allies” in Syria since Britain’s entry into the air campaign there due to the “challenges” of the Yemen conflict. For Scottish Nationalist MP Stephen Gethins this suggests that, by stepping up bombing in Syria, Western countries were effectively “cutting them [Arab states] a bit of slack to allow them to focus on the Yemen conflict”, especially needed given that support for the Yemen campaign has been flagging from states such as Jordan, Morocco and Egypt. It is particularly ironic that British MPs’ supposed commitment to destroying ISIS in Syria is actually facilitating a war in Yemen in which ISIS are the direct beneficiaries.
Finally, it is worth considering British support for the Saudi bid for membership of the UN Human Rights Council. The Council’s reports can be highly influential; indeed, it was this Council’s damning (and, we now know, fraudulent) condemnation of Gaddafi that provided the ‘humanitarian’ pretext for the 2011 NATO war against the Libyan Jamahiriya. And the Yemeni government’s recent expulsion of the UN Human Rights envoy shows just how sensitive the prosecutors of the Yemeni war are to criticism. It would, therefore, be particularly useful for those unleashing hell on Yemen to have the UN Council stacked with supporters in order to dampen any criticism from this quarter.
Britain, then, is the major external force facilitating the Saudi-fronted war against the people of Yemen. Britain, like the Saudis, is keen to isolate Iran and sees destroying the Houthis as a key means of achieving this. At the same time, Britain seems perfectly happy to see Al Qaeda and ISIS take over from the Houthi rebels they are bombing – presumably regarding a new base for terrorist destabilization operations across the region as an outcome serving British interests.