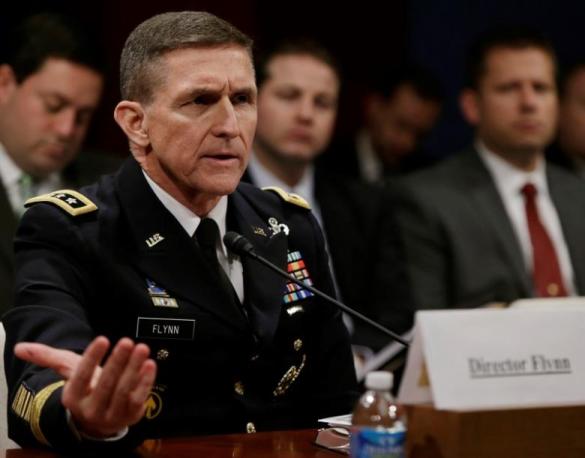 Amid demonstrations against his choice, Trump named Lieutenant General Herbert McMaster – whose book claiming the US was too soft on Vietnam is now required reading for US officers – as his new national security adviser this week.

McMaster’s appointment came after Michael Flynn, Trump’s original choice, was forced to resign earlier this month after it emerged that he had misled Vice President Mike Pence about his phone calls with the Russian ambassador back in December.

The Washington Post revealed that these conversations, which occurred before Flynn had taken up his government role, had involved discussions of discussed US sanctions on Russia. Such a discussion not only broke the ‘one president at a time’ protocol – that members of an incoming administration should not discuss policy with foreign powers – but also flatly contradicted his own earlier denials, made to both Pence and to the FBI.

As Flynn had supposedly been one of the key ‘pro-Putin’ figures in Trump’s administration, his removal has been interpreted by some as a victory for the anti-Russia ‘hawks’ in the US foreign policy establishment. This is a misreading of the situation on two levels.

First, characterising members of Trump’s team as ‘pro-Russia’ is incorrect; rather, they have, as Tom Hardy’s character in Taboo might put it, a “use” for Russia. Secondly, this plan for Russia is likely to remain intact regardless of Flynn’s removal – or McMaster’s well-publicised anti-Russia stance.

Improving relations with Russia was only one of Flynn’s two major foreign policy obsessions: the other was and is “regime change” in Iran. In his 2016 book The Field of Fight, he wrote that “Iran has been a major threat to the US for decades due to its sponsorship of international terrorism – but the US has prioritised diplomatic relations over national security”. Instead, he argued, “the US must change course. These countries must be prepared to face military action”.

In fact, it is highly likely that the so-called ‘pro-Russia’ position of Flynn, and indeed Trump, is part of a broader foreign policy initiative aimed ultimately at destroying Iran. The broad outlines of this position could already be discerned in the testimony Flynn gave to the Joint Foreign Affairs and House Armed Services Committee back in June 2015. Like so many now in Trump’s team, he expressed his dissatisfaction with the nuclear deal negotiated the year before.

“Iran represents a clear and present danger to the region, and eventually to the world,” he told the committee. When asked what he believed should be done about the prospect of Iranian nuclear development, he was unequivocal, replying that regime change in Tehran “is the best way to stop the Iranian nuclear weapons programme”.

Since then, of course, Syria has taught the West a painful lesson about ‘regime change’, namely that Russia can make it extremely difficult.

Later in his testimony, Flynn argued that there was an ‘anti-US’ alliance being developed between China, Iran and Russia: “Just look at the [Iranian] cooperation with North Korea, China and Russia. Connect those dots and you get the outline of a global alliance aimed at the US, our friends and our allies”. He continued: “Russian assistance is part of a broader pattern. After all, the Iranian nuclear reactor at Bushehr is Russian-built, the two countries work very closely together in Syria, and Russia is providing Iran with an effective anti-aircraft system that could be deployed against any aircraft seeking to destroy the nuclear programme”.

The message is clear: if you want to attack Iran, you’d better break their alliance with Russia first. Michael Ledeen, who co-authored Flynn’s book, put it simply: “The issue is whether Putin is prepared to abandon Khamenei”. This is what those phone calls, and all Trump’s flattery of Putin, are really about: attempting to draw Russia away from its alliance with Iran (and China) – and ultimately to buy Russian acquiescence for the next war.

The restoration of governmental authority in Syria currently underway, however, is not the first time that the US has suffered a military defeat at the hands of a foreign government supported by Russia. Nor is it the first time the US have responded to such a failure with a renewed attempt to split Russia from her allies.

In 1969, Richard Milhous Nixon became 37th President of the United States, and the 5th to lead US attempts to crush Vietnamese independence, inheriting what had by then become a full-scale, and disastrous, military commitment. The Tet offensive the previous year had decisively blown apart the lie that the US was winning the war, and Nixon was elected on a promise to bring about “peace with honour”.

He would achieve neither, and in fact embarked on a massive escalation of the war, including a secret carpet bombing campaign in Cambodia which led to famine and ultimately the rise of the Khmer Rouge. Yet the US’s ongoing defeat could not be abated. This led Nixon and his advisors towards a radical rethink of US strategy.

“By the time Nixon came into office,” wrote his own National Security advisor, Henry Kissinger, “East-West relations were themselves in obvious need of reassessment”. Indeed, he said, the USA’s entire Cold War strategy “needed to be reconsidered in light of the trauma of Vietnam”.

The Vietnamese victory over the US was aided significantly by support, at different times, from both Russia and China, and Kissinger’s greatest fear was the restoration of “dreaded Sino-Soviet bloc…which had inspired so much fear in the 1950s”. He added that while it was “far from clear” that the USSR was “capable of realising so vast a project…what was obvious…was that the risk could not be run”.

“If the balance of power is taken seriously,” he continued, “then the very prospect of

geopolitical upheaval must be resisted; by the time the change has occurred, it may well be too late to oppose it.”

In today’s terms, this formula translates into two specific policy requirements for the US: 1) Russian-Chinese unity must be resisted and 2) Iran’s increasing influence in the Middle East must be reversed (ideally, one presumes, before the recapture of Mosul by largely Iranian-allied militias solidifies such influence).

Like Trump and Flynn today, Nixon and Kissinger sought nothing less than the breakup of the non-Western alliance spearheaded by Russia and China that had stymied US attempts to destroy governments challenging their hegemony. And, as today, they believed US cooperation with Russia to be both possible and desirable for both parties.

Said Kissinger, “America needed breathing room in order to extricate itself from Vietnam and to construct a new policy for the post-Vietnam era, while the Soviet Union had perhaps even stronger reasons for seeking a respite”. In particular, “the idea was to emphasise those areas in which cooperation was possible, and to use that cooperation as leverage to modify Soviet behaviour in areas where the two countries were at loggerheads”, a policy that became known as ‘linkage’.

The linkage being sought today – the deal Trump wishes to make with Russia – is precisely to use potential “cooperation” over Syria, Ukraine and sanctions as “leverage” to secure Russian acquiescence for renewed hostilities towards Iran and China.

With this in mind, it is particularly interesting to note Kissinger’s role in shaping Trump’s foreign policy today. Germany’s Bild newspaper reported in December 2016 that Kissinger was a key architect of Trump’s ‘rapprochement’ policy with Russia, advising him to lift sanctions and recognise Russian ownership of Crimea. These will not be free gifts – reciprocity will be expected and demanded, and Trump is making it abundantly clear that he wants a free hand in confronting Iran and China.

Furthermore, as journalist Nafeez Ahmed has noted, “Kissinger’s ‘unofficial’ advisory role in the Trump regime is solidified through the direct influence of one of his longtime acolytes: K.T. McFarland, an aide to Henry Kissinger during the Nixon administration on the National Security Council from 1970 to 1976.”

KT McFarland, it may be recalled, was appointed by Trump as Michael Flynn’s deputy. Robert Harward, a former Navy seal, reportedly turned down the national security adviser post because Trump insisted that she stay on rather than allowing Harward to bring his own team.

In his book Diplomacy, Kissinger wrote that “Nixon had managed, despite the tragedy of Indochina, to maneuver his country into a dominant international position”, snatching a victory of sorts from the jaws of defeat, by playing Russia and China off against one another.

In this light, McMaster’s apparently conflicting views on Russia make sense. According to

Frants Klintsevich, deputy head of the defense and security affairs committee of Russia’s Federation Council, McMaster is a “100% hawk” on Russia. This appears to contrast with Flynn’s approach, putting him closer to other so-called ‘Russophobes’ in the Trump team, such as the ambassador to the UN Nikki Haley, who told the Security Council last month that “Russian actions” in the Ukraine “demand clear and strong condemnation”, and Vice President Mike Pense, who condemned Russia at the recent Munich Security Conference. Yet these figures, and their veiled and less veiled threats, are as much a part of the strategy as dangling the prospect of lifting sanctions. As Kissinger put it, “The statesman’s role is….to create a network of incentives and penalties to produce the most favourable outcome”. To pull off his ‘deal’ Trump needs his ‘bad cops’ just as much as he needs to flatter and offer inducements – to warn Russia of what they will be up against should they choose to ignore his overtures and maintain their existing alliances. The question today is: will Russia snatch defeat from the jaws of victory in Syria by allowing itself to be played off against Iran and China?

The stakes could not be higher.