This piece was first published in May 2016 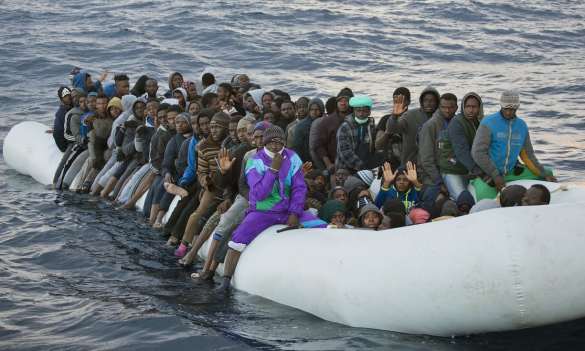 Operation Sophia has contributed to a 42% increase in fatal drownings by encouraging people smugglers to shift to flimsy rubber dinghies.

The British-led “war on people smuggling”, escalated last week by David Cameron, appears to be modelled on the failed “war on drugs” – and a new House of Lords report shows it is already producing the same disastrous results.

On 19th April 2015, the sinking of a single refugee boat off the coast of Lampedusa led to the drowning of over 700 people. By the end of the month, an estimated 1300 had drowned in the same way, making it the deadliest month on record in the Mediterranean refugee crisis. The tragedy was the direct result of a successful British-led campaign to end the Italian search-and-rescue operation Mare Nostrum, which had prevented such mass drownings before its closure in October 2014. Those events led to a public outcry and pressure to restart search-and-rescue operations; but resisting such pressure, on 23rd April 2015 the European Council instead adopted a British-drafted resolution vowing to “undertake systematic efforts to identify, capture and destroy [refugee] vessels”. The EU was giving notice that its response to the refugee crisis would no longer be based on humanitarian commitments, but on military force. It was, not coincidentally, a proposal originally made by the British fascist Nick Griffin five years earlier.

I wrote at the time that such a policy suffered all the basic economic flaws of the disastrous three-decades long ‘war on drugs’, and would lead to the same devastating results. Focusing on bombing supply without addressing demand, as any economics student could tell you, will push up prices, whilst concentrating the trade in the hands of the most ruthless and militarized providers. As a consequence, it would make the trade deadlier and more profitable but would not reduce it, as demand would remain unaffected. This has been precisely the outcome of the war on drugs, as the murder toll in Mexico’s Jalisco province – 100,000 in the eight years – grimly demonstrates. And, as a House of Lords report earlier this month shows, the same results are starting to emerge from the EU’s war on migration.

The EU’s ‘Operation Sophia’ entered into its second phase – the capture and destruction of refugee boats – last October. Since then, according to European border agency Frontex, it has destroyed 114 vessels and arrested 69 ‘suspected smugglers’. This is supposed to act as a deterrent to ‘people smugglers’, thereby limiting the opportunities for would-be refugees to flee to Europe. It has not worked. As noted by the House of Lords EU Committee’s report, “The mission does not… in any meaningful way deter the flow of migrants, disrupt the smugglers’ networks, or impede the business of people smuggling on the central Mediterranean route…There is therefore little prospect of Operation Sophia overturning the business model of people smuggling”. Indeed, numbers crossing the Mediterranean this March – almost 10,000 – were three times higher than March 2015.

That the EU’s military campaign would not deter refugee flows was entirely obvious to the witnesses interviewed by the House of Lords Committee, given that the policy does nothing to address the demand for ‘people smuggling’ services. The opening sentence of the report was a quote from Peter Roberts of the Royal United Services Institute that “migrants in boats are symptoms, not causes, of the problem.” Another witness, Steve Symonds of Amnesty International’s Refugee and Migrant Rights Programme, agreed: “If you do not have an answer to the situation of those people, we are sceptical about the mere targeting of the smugglers”, adding that the conflicts from which refugees were fleeing were “becoming more protracted and intractable and they are spreading”. Summing up, the Committee wrote: “We conclude that a military response can never, in itself, solve the problem of irregular migration. As long as there is need for asylum from refugees and demand from economic migrants, the business of people smuggling will continue to exist and the networks will adapt to changing circumstances.”

Whilst unable to reduce the numbers crossing the sea, however, Operation Sophia has had an effect on those crossings: it has made them more dangerous. As the Lords report noted, “the destruction of vessels has simply caused the smugglers to shift from using wooden boats to rubber dinghies, which are even more unsafe.” In addition, Cameron’s plans to return fleeing refugees to war-torn Libya is likely to escalate the death toll even further. On this proposal, made earlier this year, migration expert Professor Brad Blitz commented: “It’s just outrageous. Libya is a country that is divided, which cannot guarantee human rights, which has produced hundreds of thousands of displaced people…If the concern is to prevent deaths, as [Cameron] has said, then really he should be promoting safe passage, rather than diverting people so that they have to seek longer and more dangerous routes.”

The Committee also heard evidence that the EU’s militarized approach is changing the business model of refugee transport in other ways. According to Edward Hobart, Migration Envoy for the British Foreign Office, although there was “plenty of activity that [was] in the grey market or illegal or irresponsible”, at the moment there were no “large-scale organised crime groups.” This, however, was likely to change. Said the report: “Mr Hobart did see a likelihood of an ‘increase in criminal activity.’ He explained that ‘a symptom of better control … at the border, will be an increased opportunity for organised crime.’ As EU borders become more challenging to navigate, migrants will be more likely to turn to smugglers to facilitate their illegal crossings”. Criminal gangs, that is, are likely to be boosted, not deterred, by Operation Sophia. And in an ominous hint of what is to come, Lieutenant General Wosolsobe referred to one incident in which armed men had prevented the destruction of a boat. As the non-violent providers are put out of business, this is likely to become increasingly common. Just as the war on drugs has concentrated the trade in the hands of the most violent paramilitary groups, so too the war on refugees will put nonviolent groups out of business whilst ensuring that only the best armed will thrive.

And these groups will find themselves amassing ever greater profits: noted the report, “Mr Symonds was sceptical of the EU’s efforts to barricade its external border. Analysis had shown that stronger policing of the EU’s external borders had effected only ‘the movement of ever larger numbers of people around different routes by different journeys, usually at greater danger and cost to them, so of greater profit to smugglers.’”

In Latin America, this combination of concentrating the trade in the hands of violent gangs and increasing their profits has given drug smuggling groups the financial and military muscle to buy police protection for their activities. In Mexico, for example, where the drug war has been massively stepped up since 2007, “Drug Trafficking Organisations have operated….with near total impunity in the face of compromised security forces” whilst “official corruption is widespread”. The quotes are from official US Embassy cables from 2010.

Again, the EU’s military approach is likely to have the same effects on the refugee transport business in Libya, entrenching corruption and providing the most violent paramilitary groups with the financial means to buy themselves police protection. The report noted that “smugglers are part of the fabric of Libyan political and economic life. Mr Patrick Kingsley, Migration Correspondent, Guardian Media Group, explained that smugglers are often ‘connected to militias’, ‘have important roles to play in their local communities’, and ‘provide quite a lot of money to the local community’. The ‘people at the top are going to be protected to some extent, even by people who are major players in Libyan politics.’”

In sum, then, the House of Lords is clear on the results of ‘Operation Sophia’: it has failed to deter migration, increased the risk of death for refugees, and is militarizing the trade whilst boosting its profits. The likely result will be a growth in the political and economic power of the most violent paramilitaries currently involved in the trade.

So why did David Cameron last week announce an escalation in this disastrous militarization strategy? Speaking at the G7 conference in Japan, he promised to send another warship to join Operation Sophia, this time hoping to extend its mission into Libyan territorial waters.

Does he not have access to the House of Lords’ report? Is he completely ignorant of the devastating consequences of the war on drugs? Does he lack even a schoolboy level understanding of the basic economic laws of supply and demand? The English ruling class, from India to Iraq, have always presented themselves as essentially well-meaning buffoons when it comes to foreign policy; “absent-minded imperialists” who, with the best will in the world, end up bumbling into the destruction of entire regions due to their misguided commitment to the civilizing mission or to ‘faulty intelligence’. Personally, I don’t buy it.

More likely is that Cameron is pursuing this seemingly counter-productive strategy for two reasons: to justify the re-occupation of Libya, and to facilitate the boosting of his chosen death squads of the so-called ‘Libya Dawn’. Indeed, the Times noted last Thursday that British special forces are already fighting alongside Libya Dawn, the paramilitary force at war with the elected government based in Tobruk. MI6 and the CIA learnt in the 1980s that facilitating the mujahadeen’s takeover of the region’s heroin trade was a great way to allow their allies to fund themselves outside of Congressional approval. It looks like Cameron is planning to repeat the trick for the Libyan death squads’ people smuggling business.

This piece was originally published by RT