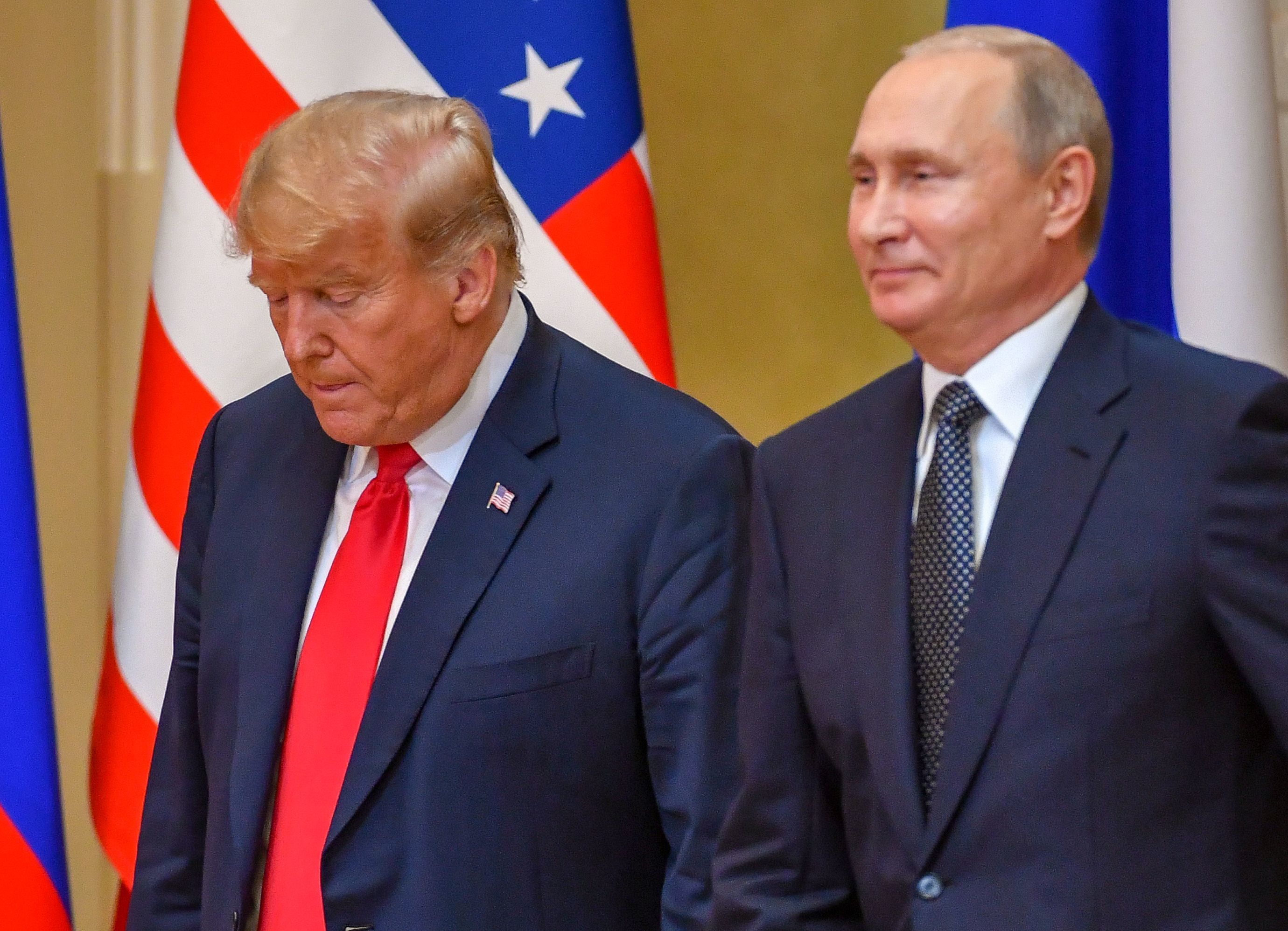 What did Trump and Putin agree in their secret meeting in Helsinki in July? Trump’s attack on the Turkish economy has given Putin just the leverage he needs with Erdogan over Idlib.

Trump’s critics warn us that his belligerent policies towards Iran and Turkey are pushing them into Moscow’s arms, even as they seek evidence of ‘Russian collusion’ in all the wrong places. This collusion is not to be found in shady backroom campaign meetings; it is hiding in plain sight.

“He does things the right way” Trump said of Erdogan last month. It shouldn’t have been a surprise; the two men have much in common after all: nationalist tubthumping autocrats with a contempt for constitutional limits on presidential might, who see few problems which cannot be solved through the right combination of willpower and firepower. His comment specifically referred to Erdogan’s ability to ignore his own parliament, and was followed up with a mutually aggrandising fistbump. Yet the budding bromance was to be short-lived.

Days later, Trump entered his now infamous two-hour private meeting with Putin in Helsinki. According to their own account, one of the main items on the agenda was Syria, which for seven years has been the battleground for a proxy war between (among others) the two men’s respective countries. In this war, Turkey and the US were supposed to be on the same side; yet Trump, on Syria as so many issues, has been ambivalent as to US goals in the conflict. The original objective, of course, was to transform Syria – an independent regional power allied to both Iran and Hezbollah – into a failed state on the Iraqi/ Libyan/ Afghan model. Yet the Syrian state – with a level of popular support surprising to those western observers susceptible to their own propaganda – stubbornly refused to be destroyed. Russian intervention helped turn the tide in September 2015, and since then, one victory after another – most notably in Aleppo – has made it clear that not only will the Syrian government survive, but that it will very likely restore its authority nationwide. Most rebel-held cities have now been retaken by the Syrian Arab Army (SAA), whilst the Kurdish YPG – who have always, correctly, feared the US-backed sectarian insurgency far more than they have feared Assad – have entered into negotiations with the government, leading to a growing role for the SAA in YPG-held areas as well. The only major population centre still fully outside government control, then, is Idlib, home to almost 3 million, and largely under the control of Hay’et Tahrir Al Sham, the latest rebrand of Syria’s Al Qaeda franchise.

All the signs are that a government offensive on this last rebel stronghold is imminent, with government forces amassing at the western edge of the province near Jisr al Shughour. Yet one major obstacle remains. Turkey.

Turkish troops are now present on the ground in Idlib at around a dozen ‘observation posts’ set up under the terms of the ‘de-escalation zones’ agreed by Iran, Turkey and Russia at the Astana conference, making a direct assault on the governorate very difficult without risking a major escalation with Turkey – still, despite everything, a NATO member. Furthermore, Turkey wields extensive influence over many of the rebel groups present in Idlib. Back in May, Turkey formed a coalition of around a dozen anti-government militias there under the banner of the ‘National Liberation Front’. Earlier this month, they persuaded two HTS splinters – Nour al-Din al-Zenki, the US-UK-funded group infamous for their livestream beheading of an 11 year old, and Ahrar al-Sham, another Al-Qaeda in all but name and attitude to the west – to sign up. Through this force, Turkey now claims to control up to 100,000 fighters in Idlib, in addition to its own troops on the ground. In other words – Turkey has positioned itself to act as a major spoiler to any forthcoming Idlib operation.

Russia, then, seeks to pressure Turkey into agreeing to, if not a surrender of the province, then at least the removal of its troops, and a negotiated settlement with its NLF proxies – perhaps even a joint operation against HTS by the SAA, the NLF and Russia. This might be acceptable to Turkey – given a guarantee of influence in the aftermath – and Russia, but would be very hard to swallow for the Syrian government, who have no desire to share power with Al Qaeda lite. What Russia needs, then, in order to oversee an Idlib settlement on its own terms, is some kind of leverage over Turkey.

Enter Trump. Trump’s attack on the Turkish currency – already under pressure from the rising dollar due to its huge mountain of debt – precipitated an unprecedented decline in its value, only stemmed by a $15 billion loan from Qatar. But this is likely to only be a temporary solution. Cut out of US markets, and facing further sanctions over its purchases of Iranian oil, what Erdogan needs is a new, more dependable ally than his volatile erstwhile buddy in the White House.

Enter Putin. On August 10th, following the Trump tweet that triggered the lira’s plunge, Erdogan immediately spoke to Putin to discuss “trade and economic cooperation”. 3 days later, Erdogan explained that he had “made advancements in our ties with Russia in accordance to our benefits and interests”. This was followed up with a visit to Ankara by Foreign Minister Lavrov the next day and then, at the end of last week, Turkish Foreign Minister Mevlut Cavusoglu was received in Moscow by Putin himself. Russia had already reaffirmed its commitment to the delivery of its much-feared S-400 missile system by early next year, and made some vague promises to use the lira in its transactions with Turkey at some unspecified point in the future. But nothing new, nothing concrete. Russia was signalling that it was ready to come to Turkey’s aid; but at a price. That price may well be Turkish support for Russian proposals in Idlib, which Putin will be hoping to finalise in the forthcoming Syria summit between Turkey, Russia and Iran next week. Already, the statements coming out of Turkey following the various meetings which have taken place have indicated something of a shift in the Turkish position, with Cavusoglu admitting the presence of “terrorist groups” in Idlib, which need to “neutralised” – “to alleviate the concerns of our Russian counterparts”. At the same time, Putin can use the prospect of Turkish acquiescence to an operation in Idlib as leverage on the Syrian government to accept both its own proposals for recognition of Kurdish autonomy and Israeli demands on the Iranian presence in Syria. Such an outcome would allow both Netanyahu and Trump to claim a much-needed victory in their campaign to ‘rollback’ Iran, whilst simultaneously increasing Iranian and Syrian dependence on Russia. Trump’s attack on the lira, in other words, by throwing Turkey into Moscow’s arms, may have been the key to unlock the final stages of a Syria settlement under Russian tutelage. This is the real Trump-Russia collusion: not in backroom campaign meetings, but hiding in plain sight.

This article was originally published on Middle East Eye