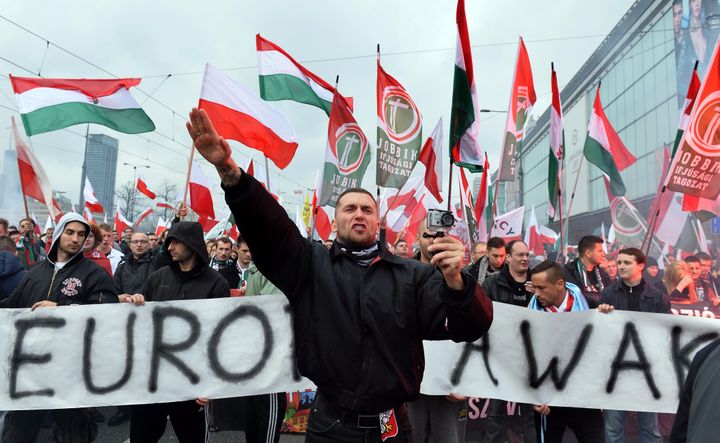 Europe needs to fascisise its policies, because if it doesn’t – fascism will grow. This was the message from Frans Timmerman, Vice-President of the European Commission following last week’s fraught negotiations over the so-called refugee crisis. “We have to patrol our borders better”, he told reporters on Thursday. “If we’re not able to tackle this issue, if we’re not able to find sustainable solutions, you will see a surge of the extreme right across the European continent.”

Sustainable solutions are, of course, available, and always have been; namely 1) stop destabilising Africa and the Middle East: which means, precisely, stop arming sectarian insurgencies (Syria, Libya and Somalia), stop sabotaging diplomatic solutions by insisting on one side’s surrender as a precondition to talks (‘Assad must go’) and stop forcing vulnerable economies to adopt regressive neoliberal policies which impoverish small producers (‘structural adjustment programmes’ and ‘free trade areas’); and 2) implement the 1951 UN Convention on Refugees, and give refuge to all those fleeing persecution and war. If tiny Lebanon – with its population of 4.5 million and a GDP of less than one third of one percent of that of the EU – can take in 1.5million refugees, one would have thought the EU – more populous and wealthier than any country on the planet – could manage a few hundred thousand.

But this is not what Timmerman is talking about. Having failed to reach consensus on taking in even a token fraction of the refugees arriving on Europe’s shores, the talk is now of a more or less formal acceptance of the ‘Hungarian solution’ – razor wire fencessurrounding fortress Europe. “After weeks of condemnation over the border fence,” noted the Daily Telegraph last week, “EU officials now appear to concede that [Hungarian Prime Minister] Viktor Orban has a point”.

Using the spectre of the far right to justify the wholesale adoption of their policies is nothing new, with elections across Europe increasingly resembling ‘racist auctions’: each party trying to outbid the others in their hostility to migrants, and always on the grounds that, if they do not, the far right will reap the benefits. ‘We will ban their benefits for two years’ announced the Labour party manifesto before this year’s election in the UK, ‘Well we will ban them for FOUR years’ rebuffed the Conservatives – neither divulging that the proportion of migrants actually on benefits is barely 1/20, compared to 2/3 of all British families.

Besides, Timmerman is profoundly wrong. Refugees do not cause the growth of the far-right any more than Jews ‘caused’ Nazism. InThe Anatomy of Fascism, Robert Paxton argues that fascism rests on“popular feelings about master races, their unjust lot and their rightful predominance over inferior people.” More precisely, he describes it as a mass emotional response to national humiliation and decline which blames internal enemies for weakening the nation’s power. This humiliation is usually caused by military defeat and a decline in global status and power, and is accompanied by economic upheaval for previously privileged sections of the ‘masses’, who resent being pushed into the ranks of the proletariat, and seek to restore their previous position.

This was obviously the situation in 1930s Germany and Italy. Italy, although on the winning side of World War One at that war’s conclusion, was denied the fruits of victory it had been promised by its allies – an outcome blamed by the nascent fascist movement on the socialists and communists who had weakened the nation sufficiently to make it ripe for bullying by the other ‘Great Powers’. At the same time, it was suffering from economic crisis and unemployment – especially amongst former soldiers – again blamed on ‘communist disruption’. Germany was in a similar position, forced by its vanquishers to sign a humiliating peace treaty, and was by the 1930s suffering some of the highest levels of unemployment in Europe. Both calamities were blamed on ‘Jewish Bolsheviks’ who had, the Nazis claimed, stabbed the army in the back with their ‘unnecessary’ surrender at Versailles, and then subsequently wrecked the country’s economy with their control of both high finance and the trade unions.

The key in both cases was that fascism tapped into an emotional pride that could not accept that national decline was simply the result of the nation’s relative weakness. There had to be another explanation – an enemy within that had weakened the nation by diluting its inherent strength. National strength could, following this logic, be rejuvenated so long as the internal enemy was extinguished. This is the core of fascism. And very similar objective conditions to those that facilitated the growth of fascism in Germany and Italy in the 1930s are also present across Europe today.

Europe today – having spent five hundred years building up a self-aggrandising mythology of itself as the font of civilization and all that is good in the world – is now in the throes of a multi-pronged crisis, at once political, economic, military and ideological. On the political level, the rise of the BRICS countries, and especially China, is threatening the world’s domination by Europe and the European settler states (the US, Australia and Canada), and this threat is increasingly manifest in every global institution – from the IMF to the World Bank and the UN. On the economic level, global capitalism is still in the throes of the crisis whose latest phase began in 2007-8, with the result that long term mass unemployment is now a permanent and growing feature of every European country at the same time as the welfare safety net for the jobless is being ever more viciously slashed away. And whilst the military defeat of Britain and some of its European allies in Afghanistan and Iraq is hardly the same level of trauma as defeat in world war, it is worth noting that the main fascist street movement in Britain today, the English Defence League, has its roots precisely in the rituals around returning soldiers from Afghanistan.

The result is that the masses of Western Europe – who have, since at least 1945, enjoyed a highly privileged position amongst the global working class – are now seeing their economic privileges evaporating, their nations’ power being challenged across the globe, and their armies being forced into unseemly retreats everywhere they venture.

All of this is the inexorable unfolding of global capitalism – whose development compels the whole world to simultaneously adopt its techniques (resulting in national competition and the rise of new global powers), lower its costs, cut its workforce – and thereby also cut the demand that underpins the whole system. This ultimately is what caused the dislocations both in the 1930s and today.

Not to the fascist, though. For the fascist, national decline must be caused by the presence of the enemy within – a ‘foreign body’ infecting the national purity which, if regained, will again restore the nation to its rightfully privileged global status. A scapegoat is essential to fascist ideology.

But this scapegoat has to be very precisely chosen. It must at once symbolize the new powers deemed to be usurping the chosen people’s rightful place in the global hierarchy, but simultaneously be vulnerable enough to be the target of attacks at home. For Hitler, the Jew met both these criteria, representing the powerful external ‘Soviet threat’ (of ‘Jewish Bolshevism’) whilst being a group easy to persecute on home soil. Likewise, the scapegoat must represent the middle class fear of expropriation from both ‘above’ and ‘below’ – once again, for Hitler, the Jew worked perfectly, symbolizing the threat to small businesses represented by big business and banking and by communism – for, in Nazi mythology, the Jew controlled both.

In today’s Europe, the Muslim plays precisely the role played by the Jew in the 1930s. The Muslim fills the ranks of the despised poor in Europe’s inner cities – always on the verge of rebellion and political radicalism, the ‘Jewish Bolshevik’ of his day – but is also the ‘Arab tycoon’ – buying up London, pricing out ordinary folks, and manipulating oil prices. The Muslim is the internal enemy, weakening the national spirit from within, whilst also representing the rising powers abroad.

This is the fascist worldview. The objective conditions for its acceptance are relative national decline; economic crisis, poverty and unemployment; and military defeat. The subjective conditions are hundreds of years of ideological brainwashing that Europe is the font of civilisation, uniquely innovative and progressive, destined to dominate the world and entitled to permanently privileged living standards. Refugees are not responsible for any of these conditions, Mr Timmerman. But you, and your entire political class, have exacerbated all of them.

This piece was originally published by Counterpunch