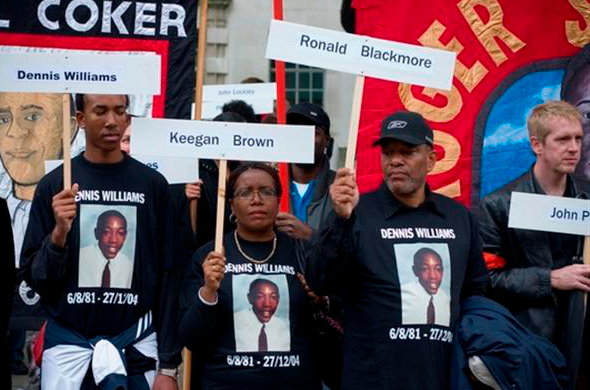 The movement against police brutality in the US has been making serious waves. Uprisings across Baltimore and Ferguson in particular have made global headlines, and a new movement, dubbed ‘Black Lives Matter’, has seared itself onto public consciousness. Revolutionaries within the movement have been calling for Black Community Control of the police, under their modified slogan Black Power Matters, and the movement as a whole has succeeded in making police brutality a live issue across the US which no politician can afford to ignore.

It is perhaps with an eye to averting such an outcome in Britain that British Home Secretary Theresa May announced in March that she would be launching the first ever public inquiry into deaths in police custody. Though receiving far less coverage, deaths ‘following police contact’ are a major issue in this country as well, with 1,433 taking place in England and Wales between 1990 and 2012, according to campaigning group Inquest. However, not a single police officer was convicted over any of these deaths.

Names such as Christopher Alder, Azelle Rodney, Sean Rigg, Kingsley Burrell and many others have become synonymous with police violence, racism, cover-up – and impunity. This year has seen a number of bitterly disappointing legal verdicts for the families and campaign groups which have been fighting for truth and justice for their loved ones and, with anger growing, the government will not have forgotten that it was precisely such a case – the police execution of Mark Duggan, and particularly the contempt with which his family was treated after the killing – that triggered a youth insurgency across inner-city England in August 2011.

So far, exact details of the inquiry have yet to emerge. And while May has expressed her desire to tackle a number of issues around deaths in custody, no concrete changes have emerged yet.

Deborah Coles, Director of Inquest – a support group providing legal advice to families of those who have died in state custody – gives me her response to the proposed inquiry. ‘We have given it a guarded welcome,’ she says, ‘but there are 2 issues for me. One is that there has been no consultation with the families or with Inquest about the terms of reference, and the terms of reference are going to be critical. But there is also that sense of déjà vu. In 30 years of our organization’s existence, there has been review after review, and there is a whole wealth of evidence out there about what the problems are. The key issue is the fact that recommendations are not implemented.’

Harmit Athwal, who co-authored ‘Dying for Justice’, an Institute of Race Relations report into deaths in custody last year, agrees with Coles. ‘In terms of the IPCC [the Independent Police Complaints Commission, which investigate deaths in police custody], you see the same mistakes being made again and again: investigations take an incredibly long time, a failure to recommend prosecutions and then, when a case gets to an inquest and there’s a critical verdict, it’s coming out about officers conferring,’ explains Athwal.

So what will have an effect? What is necessary to bring about justice for those who have died at the hands of the police? Ken Fero is emphatic that ‘there is no need for any new legislation. There is the law of murder and manslaughter and these need to be implemented for police officers. It’s as simple as that. The only change there needs to be is in the determination of the CPS to actually prosecute and the determination of the IPCC to investigate.’

This reluctance of the CPS and the IPCC to rigorously investigate and prosecute is one raised time and again by campaigners on the issue. As Deborah Coles outlines it, ‘One of the problems with the whole investigation process has been the reluctance to approach deaths in police custody as if a potential crime has been committed. We’ve seen a number of cases where we would have expected that successful prosecutions would have been brought.’

Cole specifically mentions Azelle Rodney, whose death triggered a public inquiry which concluded that there was no lawful justification for his killing, and Jimmy Mubenga, suffocated during an illegal chokehold by officers from the private security company G4S. ‘And you have to ask how it is,’ she continues, ‘that there has never been a successful prosecution of a police officer for murder or manslaughter in the last 50 years. Because that does not reflect the evidence that has come out during the investigation and inquest process into these deaths, particularly following the use of force or gross neglect. And that begs very important questions about policing in a democracy – that people can die in really disturbing circumstances and nobody is held to account.’ Athwal agrees, explaining that the IPCC issues critical reports, ‘but that it is then incumbent on the CPS to act upon them – and in 99 per cent of cases, they say there is not enough evidence to prosecute.’

No new inquiry is needed to reveal these CPS failures. The Butler Review had explicitly criticized them back in 1999. But, as Lee Bridges has noted, ‘the report of this review published in 2003 is notable more for the proposed reforms that it rejected than the changes in CPS practices which it introduced.’

Will any real change result from this inquiry? Time will tell. But the signs are not good

So one concern is clearly whether this inquiry will be any different from its predecessors in terms of its recommendations actually being carried out. But Harmit Athwal points to another worrying aspect: ‘One of the issues for us is that it doesn’t plan to look at old or current cases; so I am wondering how it can examine the issue in any thoroughness.’ Ken Fero agrees: ‘One of the caveats is that this inquiry won’t look at previous cases. So the question is – why not, if Theresa May is really concerned about what’s been going on? The only way you can stop the culture of impunity is by looking at the roots of it.’

Indeed, Fero argues that this will fatally undermine the entire inquiry: ‘What’s going to prevent officers killing is the realistic likelihood that they are going to go to jail. So the fact that she’s not willing to reopen cases – because there are cases where we have had undeniable evidence that officers have committed manslaughter and, in a few cases, murder – means that all the changes to the system for the future won’t make any difference to the culture of impunity that the police hold.’

Will any real change result from this inquiry? Time will tell. But the signs are not good.